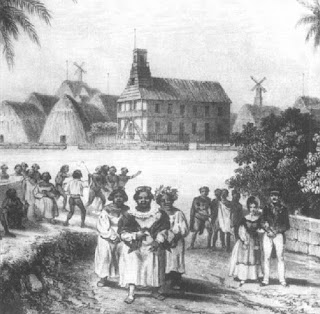 In pre-contact Hawaii, the predominant form of dress for women was the pā‘ū.

This consisted of a rectangular piece of kapa (or tapa, which was fabricated from the inner bark of wauke (paper mulberry) trees) that was wrapped several times around the waist and extended from beneath the bust (for royalty) or the waistline (for commoners) to the knee (it looked like a hula skirt.)

After contact (and particularly in the early-1800s with the start of the sandalwood trade in 1810 and then the whaling industry,) fabrics made of silk, satin and gingham began to replace the kapa fabric for the pa‘u.  This was especially true among the Ali'i.

An even more important change in dress began in the 1820s with the coming of the New England missionaries, who sought to cover the bodies of Hawaiian women, who traditionally wore nothing more than the skirt.

The missionary wives modified their New England-style dresses to adapt to the hot, humid environment.  They replaced the high waistline of Western fashion with a yoke.

The end result was a basic design (referred to as a “Mother Hubbard”) which was simply a full, straight skirt attached to a yoke with a high neck and tight sleeves.

The missionaries established women's societies that advanced the notion of modesty.

The diaries of missionary women report that Hawaiian women who had been Christianized adopted the holokū as daily dress by 1822 and it became standard dress of all Hawaiian women as early as 1838.

“All the women wore the native dress, the sack or holokū, many of which were black, blue, green, or bright rose color, some were bright yellow, a few were pure white, and others were a mixture of orange and scarlet.”  Isabella Bird 1894

“At first the holokū, which is only a full, yoke nightgown, is not attractive, but I admire it heartily now, and the sagacity of those who devised it.”

“It conceals awkwardness, and befits grace of movement; it is fit for the climate, is equally adapted for walking and riding, and has that general appropriateness which is desirable in costume.”  (Isabella Bird, 1894)

Various stories place the naming of the garment very early in its creation.  According to one, the term holokū was created from two Hawaiian words, holo meaning to go, and kū meaning to stop.

Wearing the garment for the first time, the Hawaiian women are reported to have said "Holo!  Kū!"  Very roughly translated, this means "We can run in it - we can stand!"

The more commonly cited explanation for the term, holokū, suggest native seamstresses, when sewing their dresses, would say "holo!"(run) as they turned the wheel to operate the sewing machine, and "kū" (stop) when they wished to stop at the end of a seam.  Consequently, these two words were connected and the term is explained.

The holokū was worn with a loose-fitting undergarment, the mu‘umu‘u (meaning cut-off, shortened.)  Eventually, the mu‘umu‘u came to be worn as an outer garment, as well.

The muʻumuʻu in the early days was a dress for home wear. It was made full and unfitted with high or low neck and long or short sleeves

It is the more comfortable muʻumuʻu that has challenged the present day designers to create many variations for home, street and party wear.

Although it originated in Hawaii in the 1820s as a loose gown without a waistline or train and was worn for everyday wear, the holokū today is a long formal gown with a train.

For formal events, and other celebrations related to Hawaiian culture and ethnicity, the holokū is the quintessential Hawaiian gown.

While both holokū and mu‘umu‘u continue to be very important in Hawaii, it is the mu‘umu‘u that is regarded by most of the world as Hawaiian dress and the holokū that is practically unknown outside of Hawai’i.

The image shows Kīna‘u returning from church in a drawing by Louis-Jules Masselot, in 1837, wearing a holokū, as are others in attendance with her.