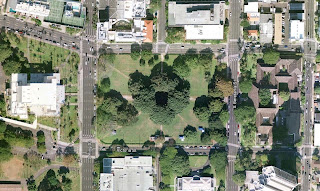 Paulet raised the British flag and issued a proclamation formally annexing Hawaii to the British Crown.  This event became known as the Paulet Affair.

Queen Victoria, on learning these activities, immediately sent an envoy to the islands to restore sovereignty to its rightful rulers.  The man chosen for this task was Rear Admiral Richard Thomas.

The day began early that Monday, July 31, 1843, with soldiers and the public collecting at the location we now refer to as Thomas Square. Rear Admiral Thomas preceded the King in one of his carriages and the King followed on horseback.

After five-months of occupation, the Hawaiian Kingdom was restored and Adm. Thomas ordered the Union Jack removed and replaced with the Hawaiian kingdom flag.

A procession then traveled from the square to ʻIolani palace. The British troops continued back to the harbor to board their stationed ships, in a symbol of withdrawal from the islands.

Shortly thereafter, the King made his way to Kawaiahaʻo church where people assembled for a public thanksgiving service.

It was on the occasion that Kamehameha III was reported to say, "Ua Mau Ke Ea o Ka ʻĀina I Ka Pono" - The life of the land is restored in righteousness. (This statement has since become the official motto of the State of Hawaiʻi.)

Missionary Gerrit Judd and Admiral Thomas stood beside the King, and Judd followed the speech with a translation of Admiral Thomas’ declaration to the King. John Papa Īʻī made a twenty minute speech which included the Act of Grace from King Kamehameha III, pardoning those who cooperated with the British during their reign.

After the large assembly adjourned, the King proceeded to the wharf and was saluted by British vessels before he went on board the HMS Dublin to dine with Admiral Richard Thomas.

A few days later, on August 3, friends of the King, residents and soldiers, gathered for a large luau offered by the King in Nuʻuanu Valley (at Kaniakapūpū,) and is later remembered as the Lūʻau for 10,000 people.

July 31, 1843 is now referred to as Ka La Hoʻihoʻi Ea, Sovereignty Restoration Day, and it is celebrated each year in the approximate site of the 1843 ceremonies.

From that day, the plot of land on which the ceremonies took place was known as Thomas Square. Kamehameha III later officially gave this name to the area and dedicated it as a public park.

In 1925, a Joint Resolution of the legislative session set aside Thomas Square as a public park and placed it under the management of the Park Board of the City and County of Honolulu. It remains this today.

Thomas Square is approximately 6.4 acres of landscaped lawn across South Beretania Street from the Honolulu Academy of Arts.

The center of the square is marked by a single fountain spurting 20 ft. in the air and cascading into a surrounding pool.

The central area of the park is made cool and shady by the presence of a huge banyan tree. Other areas of the park are shaded by different varieties of banyan, flowering shower trees, and other trees/shrubs.

The square is bounded on all sides by a wide pedestrian sidewalk allowing the interior space has lawn and shaded areas for recreational use.

The image is from Google Earth – can others see that Thomas Square eerily appears to be patterned after the British flag? (Intentional, or a very interesting coincidence?)