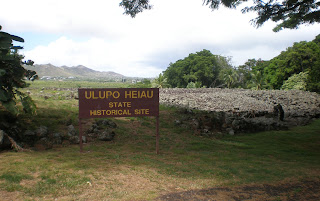 About 6,000 years ago and before the arrival of the Hawaiians, Kawainui (the large [flow of] fresh water) and Ka‘elepulu (the moist blackness) were bays connected to the ocean and extended a mile inland of the present coastline.  This saltwater environment is indicated by inland deposits of sand and coral.

A sand bar began forming across Kawainui Bay around 2,500 years ago creating Kawainui Lagoon filled with coral, fish and shellfish.  The Hawaiians probably first settled along the fringes of this lagoon.

Gradually, erosion of the hillsides surrounding Kawainui began to fill in the lagoon with sediments.

About 500 years ago, early Hawaiians maintained the freshwater fishpond in Kawainui; the fishpond was surrounded on all sides by a system of canals (‘auwai) bringing water from Maunawili Stream and springs to walled taro lo‘i.

In 1750, Kailua was the political seat of power for the district of Ko‘olaupoko and a favored place of the O‘ahu chiefs for its abundance of fish and good canoe landings.

The houses of the Aliʻi (chiefs), their families, and their attendants surrounded Kailua Bay. Behind the sand beach was the large, fertile expanse of Kawainui which has been converted to a fishpond surrounded by an agricultural field system.

Kawainui was a large, 400 acre fishpond with an abundance of mullet, awa, and o'opu. Ka'elepulu and Nuʻupia fishponds are nearby. The makaʻāinana (commoners) provided support for this chiefly residence.

Farmers grow kalo (taro) in the irrigated lo'i (fields) along the streams from Maunawili and along the edges of the fishponds. Crops of dryland kalo, banana, sweet potato, and sugarcane mark the fringes of the marsh. The fishermen harvest fish from the fishponds and the sea.

The kahuna (priests) oversee the religious ceremonies and rites at several heiau around Kawainui. There is Ulupō Heiau on the east with Pahukini Heiau and Holomakani Heiau on the west side.

Ulupō Heiau measures 140 by 180 feet with walls up to 30 feet in height. The construction of this massive terraced platform required a large work force under the direction of a powerful ali'i.

Several O'ahu chiefs lived at Kailua and probably participated in ceremonies at Ulupō Heiau, including Kākuhihewa and Kualiʻi.

Kualiʻi fought many battles and he may have rededicated Ulupō Heiau as a heiau luakini.

Maui chief Kahekili came to O'ahu in the 1780s and lived in Kailua after defeating O'ahu high chief Kahahana for control of the island.

Kamehameha I worked at Kawainui fishpond and is said to have eaten the edible mud (lepo ai ia) of Kawainui when there was a shortage of kalo. But by 1795, when Kamehameha I conquered O'ahu, it is believed that Ulupō Heiau was already abandoned.

Farmers grew kalo (taro) in the irrigated lo‘i (fields) along the streams from Maunawili and along the edges of the fishponds.  Crops of dryland kalo, banana, sweet potato and sugarcane mark the fringes of the marsh. Fishermen harvest fish from the fishponds and the sea.

In the 1880s, Chinese farmers converted the taro fields of Kawainui to rice, but abandoned their farms by 1920. Cattle grazed throughout much of Kawainui.

Ulupō Heiau was transferred from the Territorial Board of Agriculture and Forestry to Territorial Parks in 1954.

In the early 1960s, through a joint effort of State Parks and Kaneohe Ranch, the stone walkway was placed atop the heiau and the stone paving was laid around the springs. The bronze plaque was installed in 1962 by the Commission on Historical Sites.

Ulupo Heiau is listed on the National and Hawaii Registers of Historic Places. At Ulupo Heiau, State Parks seeks to promote preservation of the heiau and heighten public awareness about the cultural history of Kawai Nui.

The Kailua Hawaiian Civic Club and ‘Ahahui Malama I ka Lōkahi are the co-curators at this State Park heiau complex.

The image shows Ulupō Heiau and overlooks Kawainui Marsh.  In addition, I have included a few more images of Ulupō Heiau in a folder of like name in the Photos section on my Facebook page.