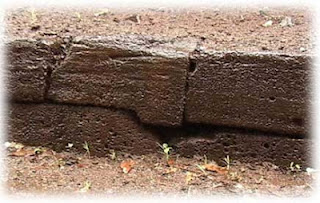 Kīkīaola (“sprouting springs of Ola") is a ditch that was built prehistorically to irrigate the taro patches in lower Waimea Valley.

Legends and chants tell of Ola, King of Waimea, who, through Pi, his kahuna (priest), ordered Menehune to build a watercourse here; each brought a stone, and the ditch was finished in a single night.

The ditch runs for a length of 7,000-feet. It is estimated that 75-acres of farmland below the tunnel and 35-40-acres above the tunnel can be irrigated by the ditch.  In places, the ditch is over 20-feet high.

There is only a 100-foot length of intact ditch wall visible which is located just above (north) the tunnel.  The road construction built up a roadbed of dirt on the riverside of the ditch wall that left only the upper 2-feet of the ditch wall exposed.

This remnant is marked by a bronze plaque that was set into the pali face in 1928 by the Territory of Hawaiʻi to mark the historical significance of the site. The dirt bermed ditch contiguous with the walled portion appears to be an intact portion of the original ditch but lacks the exposed stonework.

The earliest written account of the ditch is by Captain George Vancouver in 1792 when he visited Waimea Valley.  Vancouver recorded the site at this time as follows:
"As we proceeded our attention was arrested by an object that greatly excited our admiration, and at once put an end to all conjecture on the means to which the natives resorted for the watering of their plantations.”

“A lofty perpendicular cliff now presented itself, which, by rising immediately from the river, would effectually have stopped our further progress into the country, had it not been for an exceedingly well constructed wall of stones and clay about twenty-four feet high, raised from the bottom by the side of the cliff, which not only served as a pass into the country, but also as an aqueduct, to convey the water brought thither by great labour from a considerable distance; the place where the river descends from the mountains affording the planters an abundant stream, for the purpose to which it is so advantageously applied.  This wall, did not less credit to the mind of the projector than to the skill of the builder, terminated the extent of our walk."  (Vancouver)

Kīkīaola represents a prehistoric irrigation feature (aqueduct) used to transport water to the taro fields on the western side of Waimea River in lower Waimea Valley. The water was being used to irrigate cultivated lands located considerably above the level of the river.

An added engineering challenge "was that of carrying the water, at a high level, around the corner of a jutting cliff. An added difficulty was the necessity of placing the base of the causeway in the river itself where it was constantly in danger of being washed away by a freshet."  (Archaeologist Wendell C. Bennett)

Kīkīaola is the only example of jointed stonework and offers a unique example of this type of causeway construction.  Additionally, there are three types of joints represented, including double joint, square joint and notched joint.

Bennett made the following description of the courses of stacked cut stone just above the tunnel, “The stones of this ditch are squared off on all sides but the inside. Some of the blocks are squared all around. The object was to have the stones fit closely together and present a smooth, flat surface on the river side. On the inside, where the fill was of dirt or stone or both, the roughness was perhaps beneficial.”

The presence of the dressed stone in the Menehune ditch is unique for Hawaii and for Polynesia. There is, to be sure, other dressed stonework, but none used for aqueducts, and none with the joints in the blocks.

The extent of this one undertaking is unusual for the Hawaiian Islands where dressed stonework is rare. In most other structures slabs are used instead of blocks.

“The Menehune Ditch is the finest example of such rare stone dressing in the Hawaiian Islands. Today the site consists of about 120 carefully cut-and-dressed stones, closely fitted along a distance of some 200 feet, and forming the outer face of the irrigation canal. This canal, which still carries water to taro fields at the mouth of Waimea Valley, Runs immediately adjacent to the narrow road winding between the cliff and Waimea River.” (Archaeologist Patrick V. Kirch)

Historical modifications to the original structure took place around 1920 when the road was built (as well as when a horse path ran parallel to the ditch, before the road was constructed.)

Likewise, top stones of the wall in sections were removed by valley residents for personal use, by the construction crew to build up the retaining wall for the road and other stones were used to construct the realignment of the ditch.

The image shows a portion of the remaining portion of Kīkīaola (Menehune Ditch.)  In addition, I have added other images in a folder of like name in the Photos section on my Facebook page.