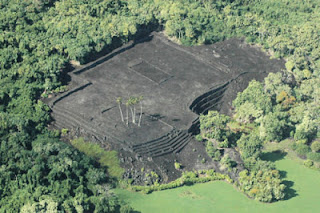 This is Hawaiʻi’s (and maybe Polynesia’s) largest, heiau that is still intact (it is situated near Hāna, Maui.)

Standing over 40-feet high, the stone platform is 289-feet by 565.5-feet; Piʻilanihale Heiau is a stepped lava rock platform the size of nearly two football fields.

The north wall is the longest wall and measures 565.5-feet.  It is also the highest wall, measuring about 43-feet at its maximum point.

This wall contains the most unusual feature of the Heiau, the immense retaining wall that fills a gully between the two ridges comprising the Heiau foundation.

According to Cordy, this wall is unique in Hawaii: “it is built of superbly fitted stones ..... and has four [terraced] steps up its face.”

Piʻilanihale Heiau (also identified as Hale-o-Piʻilani Heiau) is one of the most important archeological sites in the Hawaiian Islands and is impressive in size and architectural quality.

Archaeologists believe the heiau (temple) was constructed in four stages, beginning as early as the 12th century.

The earliest shrines and rituals appear to have been simple ones constructed by families and small communities and dedicated to the gods of peace, health, fertility and a good harvest of the products of the land and the sea.

With increased population growth and social organizational complexity, religion, the legitimizing sanction of directed social and political change, evolved becoming integrated with government at the state level as well as at the local and personal level. Large and complex temples were constructed for public ceremonies dedicating major events.

Sometimes the ceremonies lasted for days. Between these major events, the temple might be left untended which accounts for the seeming neglect of some of these structures recorded by early voyagers to the Islands.

Archeologically Piʻilanihale Heiau’s occupation and use span both the prehistoric and historic periods.

Each rebuilding episode may commemorate a significant event in the reign of a particular chief or king. The stylistic changes embodied in these structures, therefore, not only document evolutionary changes in social organization and the evolution of religion, but may be stylistically identifiable with prominent lineages or personages.

In addition to serving as a heiau, some archaeologists believe this structure may also be the residential compound of a high chief, perhaps that of King Piʻilani.

The royal compound probably would have included the king's personal temple.

The literal translation of Piʻilanihale is "house (hale) [of] Piʻilani."

It is not known if the first king of the Piʻilani line built the structure or whether it was constructed by one of his several well-known descendants: his sons Lono-a-Piilani and Kihapiilani, and his grandson Kamalalawalu.

According to oral tradition, in the 16th century, Piʻilani unified the entire island of Maui, bringing together under one rule the formerly-competing eastern (Hāna) and western (Wailuku) multi-district kingdoms of the Island.

Hāna served as one of the royal centers of the kingdom.

Several generations later, through inter-island conquest, the marriage of his brother to the Queen of Kauaʻi, and appointment of his son to alternately govern Maui, Lānaʻi, Kahoʻolawe and Oʻahu during his periodic absences, Kahekili by 1783 dominated all the Hawaiian Islands except for Hawaiʻi.

Hāna continued to be a center of royal power until 1794, when Kamehameha I, ruler of the Kingdom of Hawai‘i, defeated the Maui army and Maui came under him.

In 1848, the Hawaiian Monarchy was created and private land ownership was established. As a direct result of this new land ownership system, one-half of the ahupua‘a of Honomā‘ele, roughly 990 acres, was granted to Chief Kahanu by Kauikeaouli (King Kamehameha III).

In 1974, members of the Kahanu/Uaiwa/Matsuda/Kumaewa Family (descendants of Chief Kahanu) and Hāna Ranch deeded 61 acres of land to the then Pacific Tropical Botanical Garden to establish Kahanu Garden.

In exchange, the institution promised to restore Pi‘ilanihale, share it with the public, and provide perpetual care for this sacred site as well as the family graves that are on this ‘āina (land).

The restored Piʻilanihale Heiau is within the grounds of the National Tropical Botanical Garden’s Kahanu Garden.  I have added other related images in a folder of like name in the Photos section on my Facebook and Google+ pages.