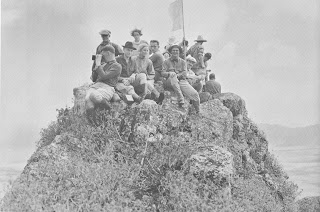 A story has it that Olomana was a giant and imposing warrior that ruled the area between Makapuʻu and Kualoa, in Windward Oʻahu.

Olomana was famous for his great strength and his enormous height. ʻAhuapau, the king of Oʻahu, was in fear of this man and because of this he never traveled to Koʻolau. From the Makapuʻu point to the Kaʻoio point, at Kualoa, was kapued and sacred to Olomana. (Fornander)

“Olomana was twelve yards, or six fathoms in height, if standing and measured from the head to the feet.“

When Palila arrived at the top of the Nuʻuanu cliff he laid down his club and sped on till he reached Kaʻelepulu, the place where Olomana was standing.

In this flight of the club, Palila seized hold of the end and was carried by it until he lit on the shoulder of Olomana, whereupon Olomana asked Palila: “Where are you from, you most conceited boy? for my shoulder has never been stepped on by anybody, and here you have gone and done it.” (Fornander)

Palila replied: “I am from the kapued temple; from Alanapo in Humuula, Kauai. My name is Palila and I am a soldier.” When Olomana heard this he was afraid and begged of Palila that he be saved.  (Fornander)

Palila, however, refused saying: “You shall not live.”

Palila slayed Olomana by cutting him in half.

Mount Olomana was formed as a result of a sensational battle between Olomana and Palila, a warrior sent by ʻAhuapau, the King of Oʻahu, to slay Olomana.  (KIS)

Part of Olomana became Mount Olomana; the other part of Olomana ended up on the far side of Kawainui as Mahinui, the ridge separating Kāneʻohe from Kawainui, where Kalaheo High School is located.

The second flat-topped peak is Pakuʻi at 1,520-feet named after the konohiki for the adjacent fishponds of Ka’elepulu (at what is now generally referred to as  Enchanted Lake)  and the third knife-edged peak is Ahiki at 1,480-feet (nearest Waimānalo) named after the warrior Olomana’s konohiki or overseer responsible for the wetlands of Kawainui.

Geologists note Olomana is a residual ridge, a remnant of the old Koʻolau volcano.   (Other remnants of that volcano include Keolu Hills and the Mokulua Islands.)  (SOEST)

Olomana seems to be a favorite for hikers.  They say it’s for intermediate to expert level hikers.  The trail is approximately 2.5-miles long. The terrain is rugged with many areas only passable with the aid of ropes.

From our house, we can see silhouettes of folks on Olomana’s peak.  Likewise, we regularly see helicopters hovering over the area, rescuing another of these hikers.

The image shows Olomana with hikers from the Trail and Mountain Club (Baker, Saga) in the early-1930s.  In addition, I have added other images in a folder of like name in the Photos section on my Facebook and Google+ pages.