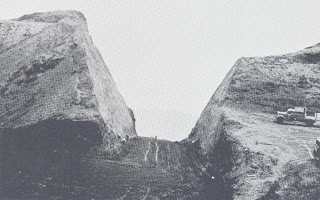 From Kūkaniloko (royal birth stones near Wahiawa,) the winter solstice (December 21) occurs when the sun is aligned with Kolekole.

The Waiʻanae ahupuaʻa has an un-typical shape – it has two parts: Waiʻanae Kai, on its western side, runs from the ocean to the Waiʻanae Mountains (like a typical ahupuaʻa;) however, Waiʻanae Uka continues across Oʻahu’s central plain and extends up into the Koʻolau Mountains.

As a result, the trail was of strategic importance. Kolekole Pass is not far from the base of Mount Kaʻala, the highest summit on O‘ahu, an important place in Hawaiian religion, ceremony, legend and perhaps celestial observations.

When Kahekili was reigning as king of Maui, and Kahahana was king of Oʻahu, it was during this period that Kahahawai, with a number of warriors, came to make war on Oʻahu (Kahahawai was a strategist for Kahekili.)

A decisive battle in the war between Kahekili and Kahahana, fought in the Waiʻanae mountain range, took place near Kolekole Pass.

“Kahahawai told them to prepare torches. When these were ready they went one evening to the top of a hill which was near to the rendezvous of the enemies where they lighted their torches.”  (Fornander)

“After the torches were lit they moved away to a cliff called Kolekole and hid themselves there, leaving their torches burning at the former place until they died out. The enemies thought that Kahahawai and his men had gone off to sleep. They therefore made a raid … But Kahahawai and his men arose and destroyed all the people who were asleep on the hills and the mountains of Kaʻala. Thus the enemies were annihilated, none escaping.”  (Fornander)

Therefore, the conquest of Oʻahu by Kahekili was complete through the bravery and great ingenuity of Kahahawai in devising means for the destruction of the enemy.  Oʻahu remained until the reign of Kalanikūpule, Kahekili’s son - until Oʻahu was conquered by Kamehameha in 1795.

Near Kolekole Pass is the Kolekole Stone, which is described as a “sacrificial stone,” but the story that victims were decapitated over this stone may be a fairly recent rendition. Older stories suggest the stone represents the Guardian of the Pass, a woman named Kolekole.

Reportedly, Kolekole was a place where students practiced lua fighting. Students practiced their techniques on “passing victims” on the “plains of Leilehua.”  Lua was an “art” that involved dangerous hand-to-hand fighting in which the fighters broke bones, dislocated bones at the joints, and inflicted severe pain by pressing on nerve centers.

This form of fighting involved a number of skills: “first, how to grasp with the hands, second, how to prod with a kauila cane; third, how to whirl the club called the pikoi or ikoi that had one end … tied with a rope of olona fibers.”  (Na Oihana Lua Kaula 1865 – Army)

In the late-1800s, James I Dowsett had ranching interests on lands now occupied by Fort Shafter, Schofield Barracks and Wheeler Army Airfield; portions of the latter two were part of his extensive Leilehua Ranch. Cattle from George Galbraith’s Mikilua Ranch in Lualualei Valley on the Waiʻanae coast may have been herded across Kolekole Pass to pasture on Leilehua Ranch plateau lands.

With later US military use in Waiʻanae and Central Oʻahu, passage through Kolekole Pass provided a convenient short cut across the Waiʻanae Mountains between Schofield Barracks and Lualualei Naval Magazine.  The Army's 3rd Engineers corps constructed vehicular passage in 1937.

Kolekole Pass, is located at the northern corner of the Lualualei Valley and connects the Waianae coast with Waianae Uka (the present Schofield Barracks.)

On the morning of December 7, 1941, six Japanese carriers transported torpedo planes, dive bombers and fighters to a point about 220 miles north of Oʻahu.  Launching the aircraft in two waves, the attackers achieved total surprise and wreaked havoc.

Contrary to general belief, the attacking aircraft did not come through Kolekole Pass west of Wheeler but flew straight down the island.  Most of the attacking planes approached Pearl Harbor from the south.  Some came from the north over the Koʻolau Range, where they had been hidden en route by large cumulus clouds.  (hawaii-gov)

In 1997, a 35-year-old, 35-ton white steel cross at Kolekole Pass was ordered dismantled by the Army – threatened with lawsuit, they chose removal, rather than fighting a separation of church and state claim.

The first cross at the pass was put up in the 1920s; this later metal one was erected in 1962.  It was later replaced with an 80-foot flagpole that flew an American flag.

The image shows Kolekole Pass after blasting completed in 1935 (SagaOfTheSandwichIslands.)  In addition, I have included other images in a folder of like name in the Photos section on my Facebook and Google+ pages.