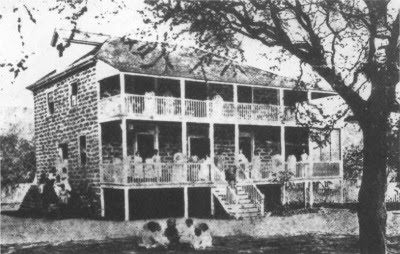 Kawaiahaʻo Female Seminary In 1867, the Hawaiian Mission Children’s Society (HMCS - an organization consisting of the children of the missionaries and adopted supporters) decided to support a girls’ boarding school. An early advertisement (April 13, 1867) notes it was called Honolulu Female Academy. Lydia Bingham (daughter of Reverend Hiram Bingham, leader of the Pioneer Company of missionaries to Hawaiʻi) returned to Honolulu to be a teacher and run the school. In 1905, a merger with Mills Institute, a boys’ school, and Kawaiahaʻo School for Girls led to the formation of Mid-Pacific Institute.

Click link below for more images and information:
http://imagesofoldhawaii.com/kawaiahao-female-seminary/
Posted by Peter T Young at 4:00 AM