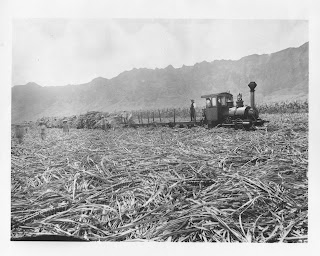 High Chief John Adams Kuakini Cummins was born on Oʻahu on March 17, 1835, the son of High Chiefess Kaumakaokane Papaliʻaiʻaina and Thomas Jefferson Cummins, Jr.  His mother was a cousin of King Kamehameha I.  His father was a wealthy and aristocratic Englishman, born in Lancashire and reared in Massachusetts, who came to the Islands in 1828.

Thomas Cummins first acquired interests in land in Waimānalo (meaning potable water) on March 27, 1842, when High Chief Paki leased Cummins a parcel of land on which to build a house (that he named Mauna Loke, or Rose Mount)

On November 25, 1850, Cummins leased 970 acres in the same vicinity from King Kamehameha III.  This property extended from Popoʻokaʻala Point to the hills of Kaʻiwa and Kaʻakaupu of the Koʻolau district.  Over the years more land was acquired.  In 1890, Cummins leased nearly 7,000-more acres for his sugar operation.

The land was first used as cattle pasture and horse breeding ranch.  After attending the Royal School, Cummins worked on his father's ranch, becoming manager in 1855.

One of the goals in horse breeding related to racing, an item of interest to the royalty and elite in Honolulu.  Cummins had one of the largest stocks of race horses (and introduced some blooded stock to the islands) and was a promoter of horse racing.  In about 1872, a horse racing track was laid out at Kapiʻolani Park. He was a Charter member of the Hawaiian Jockey Club in 1885.

Cummins was instrumental, in helping King Kalākaua effect a reciprocity treaty with the United States in 1874, after which the sugar industry prospered.

John conceived the idea of converting the ranch into a commercial sugar venture in 1877, two years after King Kalākaua had concluded a reciprocity treaty with the United States, greatly enhancing the sugar industry in the kingdom. Its first mill started grinding cane in January 1881.

The mill stood near Poalima Street behind present-day Shima's Market on Kalanianaʻole Highway. Homes were on both sides of the highway.   Rail tracks were laid out and three locomotive engines were brought in to haul cane to the mill and the wharf.

The sugar plantation required more water than was easily available and a ditch was built to divert water from Maunawili Stream to Waimanalo.  Two million gallons of water per day was pumped through a 2-mile long tunnel through Mount Olomana and into a reservoir where it was tapped to Waimanalo Sugar Company until the 1950s.

In the 1870s, Waimānalo Sugar Company built a 700-foot pier, Waimānalo Landing (near what is now the intersection of Huli Street and Kalaniana’ole Highway,) to use to transport the sugar, as well as serve as a landing for inter-island steamers (it was dismantled in the early 1950s.)

The railroad tracks from the mill culminated at a long wooden pier; at the end of the pier, winches and cranes lifted the bags of sugar onto the vessel alongside.  Today, the line of broken pilings and all the landing’s machinery and crane and rigging, lies submerged beneath 12-15 feet of water at Waimānalo Beach Park.

The 86-foot ocean steamer "SS Waimānalo" (later renamed "SS John A. Cummins" or "Kaena") owned by John Adams Cummins of the Waimanalo Sugar Plantation Company, made trips twice a week between stops in Koʻolaupoko (Heʻeia and Waimānalo) and Honolulu, exporting sugar and returning with supplies and goods.

Control of the plantation passed to W. G. Irwin and Co. in 1885, with Cummins continuing as manager.  Cummins was ahead of the time in adopting a sort of "social welfare" plan for his employees, building a large structure containing a reading room and a section for dances and social gatherings for the plantation laborers.

It was decorated with Chinese and Japanese fans on the ceiling and pictures of King Kalākaua and other members of the royal family on the walls, and contained books, tables, an organ and singing canaries.

In 1889 he represented Hawaiʻi at the Paris exposition known as Exposition Universelle. On June 17, 1890 he became Minister of Foreign Affairs in Kalākaua's cabinet, and thus was in the House of Nobles of the legislature for the 1890 session.

He died on March 21, 1913 from influenza after a series of strokes and was buried in Oʻahu Cemetery.

One lasting remnant of those plantation days is the Saint George Catholic Chapel. It is among the oldest parishes in Waimānalo. Built in 1842, it still has a sizable congregation, many of them descendants of the Portuguese and the Filipinos who worked for the sugar company.

The image shows the cane being hauled via temporary train tracks to the mill.  I have added other images on this in a folder of like name in the Photos section on my Facebook page.