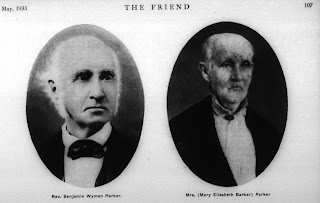 From the time of early Polynesian settlement the ahupuaʻa of Kāneʻohe was a desirable place to live.  With its fertile land and abundant water sources, it is estimated that the 1779 population of the Kāneʻohe Bay area was probably somewhere between 15,000 and 17,000 people.

When foreigners began to settle in Hawaiʻi, Kāneʻohe was relatively isolated. The Bay did not provide a good anchorage and the trail over the Pali was treacherous.

The American Protestant missionaries decided to open a mission in Kāneʻohe.

The Rev. Benjamin Wyman Parker (born October 13, 1803 in Reading, Massachusetts) and his wife Mary Elizabeth Parker (known in Hawaiʻi as “Mother Parker” - of Branford, Connecticut) were in the Sixth Company of the Sandwich Island Mission, arriving in Honolulu on May 1, 1833 on the ship “Mentor.”

Almost immediately they joined the Alexander and Armstrong families to open a mission in the Marquesas, on July 21, 1833.  Their first and only son, Henry Hodges Parker was born there.  They returned to Honolulu and were assigned to the “Kāneʻohe Station” on Windward Oahu.

"We reached this little nook after a voyage of two days in safety. This little bay—Kaneohe—is now our home. The people speak to us in an unknown tongue, yet are exceedingly kind. We have a large grass house to live in, without a window, partition or floor—not one fixture—not even a shelf. Almost all we had was left behind … Surely we may live and feel like pilgrims without any difficulty. Our cookhouse is two stones sheltered only by the open heavens." (Mary Parker, The Friend, May 1933)

When the Kāneʻohe Mission Station first opened in 1835, "high chief Liliha, who officiated as a sort of 'Mother-superior' of the place [Koʻolaupoko], located her 'new teachers' [Missionary Parker and his family] on a little bluff on the edge of a beautiful bay [Kaneohe Bay]"

In 1835, Parker opened a school for 60 children; and another for men and women. The following year, he had 100 children.

“The high Chiefess Liliha had located her "New Teachers," as she called them, on this bluff overlooking a beautiful bay.  The locality was called "Aipaakai," literally an invitation to eat salt. Here they began the work of a lifetime. The Hawaiians from Waimanalo, one extreme, to Kualoa, the other extreme of the district, numbered about 10,000. The barrier of language was soon removed as they learned to speak the Hawaiian language; and within a few weeks (Parker) preached his first sermon to his people.” (The Friend May, 1933)

The school was initially in a grass hut. Later, they moved into a stone mission house provided again by Liliha, a quarter mile inland.

"Our new stone meeting-house, now nearly finished, is 95 feet in length by 42 in width. It has been erected by the voluntary effort of the church members.  Our old grass house, in which we had worshipped eight years, had become too poor to allow of our assembling in it much longer. ... The people are poor, and destitute of every facility for erecting a permanent house.  Yet they entered more than willingly upon the work ... not more than 75 (of the 100 male members) are able to labor at such work, a number being aged and infirm. Yet these 75 have collected the materials for the house, consisting of stone, wood, and lime; they have assisted in laying the walls; they have been to the mountains to cut and draw timber, besides contributing in other ways to pay the carpenters and masons. The female members of the church have contributed monthly 12 ½ cents in money, or in some available articles, for the same object."  (The Friend, May 1933)

“(Parker) preached to large congregations; organized schools; taught classes; took long journeys either on foot or horseback to outlying districts, going from house to house, advising, helping, instructing his people; inspected the schools, guided the Hawaiian teachers; collected timber in the mountains for building purposes; superintended the building of churches and schoolhouses; planted trees; laid out roads; and directed the course of a stream of water from the mountains. The brook which runs its way in front of the modern public school is due to his foresight.”  (The Friend, May 1933)  He also helped survey the Koʻolau lands for the Great Māhele.

Their three daughters were born at the Kāneʻohe Station, Mary in 1835, Harriet in 1837 and Caroline in 1840. All of their children carried on their parents work. Mary and Caroline were in charge of a boy’s reform school in Pālama. Their son, Henry became pastor of Kawaiahaʻo Church in 1863 and served in that position for 54-years.

“A telescope leveled on the pali for coming visitors told the Parker girls how much taro and sweet potato to prepare for dinner. That telescope and the handbell used as a signal for the sexton to ring the church bell, were part of the family belongings for years.”  (The Friend, May, 1933)

In 1848, Rev. Parker reported the foreign population of Koʻolaupoko to be only seven (one Swede, two Englishmen and four Americans) , three of whom were married , each having one child. One was a house carpenter and the others "cultivate the soil to some extent".

Following the Māhele, Parker acquired Koʻolaupoko lands, the ʻili of Lilipuna and other Kāneʻohe lands (over 55-acres total in 1851) and almost 650-acres of Waiheʻe, in 1855.  By 1869 Parker owned all the land of Waiheʻe except for the kuleana lands.

His son Henry formed the Parker Sugar Company and had about 80-acres in cultivation in 1880; they were only planters, the grinding was done at the nearby Kāneʻohe Sugar Plantation.

In 1894, the Parker family, the major landholder in Waiheʻe, leased rice property to the Sing Chong Company, a hui that also possessed or leased lands in Kaʻalaea and Kahaluʻu

In 1853, the Hawaiian Missionary Society reopened the Marquesas mission; Reverend Parker accompanied local emissaries in 1853 and 1867. Later in 1867, he retired and moved to Honolulu. He died in Honolulu March 23, 1877 at the age of 74.

In December 1905, the Hawaiian Mission celebrated the one-hundredth birthday of Mother Parker, noting, “For many years you have remained the sole survivor of that large band of missionaries with whom you labored more than sixty-five years ago for the spiritual and social uplifting, through Christ, of these beloved Hawaiian people, while children who remember those early days have grown aged or gone on before.”  Governor Carter came with congratulations, and a call from the former Queen was highly appreciated.

In 1927, The Reverend Benjamin Parker School (originally called Kāneʻohe School) opened in Kāneʻohe, Oʻahu, on land donated by the Parker family.  It is the first school in the Windward district.  It started as an elementary and intermediate school, grades 1-8.

Over the years, it expanded in size and grades taught; in 1937 it became an elementary and high school, grades 1-12.  In 1951, when Castle High School opened, Parker reverted to an elementary school, serving grades K – 6.   A fire destroyed portions of the school and it was reconstructed in 1973.  The school currently serves about 330 students.

The image shows Benjamin and Mary Parker.  Lots of stuff here from The Friend, Kāneʻohe: A History of Change and the Benjamin Parker School website.  In addition, I have added other images in a folder of like name in the Photos section on my Facebook and Google+ pages.