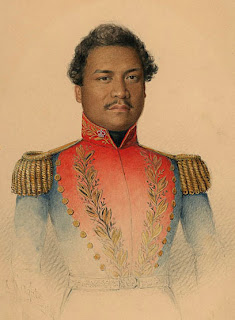 Kauikeaouli appeared to be stillborn, but was revived.  He was the second son of Kamehameha I.   His birth site is at the head of Keauhou Bay (the Daughters of Hawaiʻi own and maintain the area.)

His exact birth date is not known; however, the generally accepted date is August 11, 1813.  Never-the-less, Kauikeaouli was apparently an admirer of Saint Patrick and chose to celebrate his birthday on March 17.

Kauikeaouli spent the first 5-years of his life with Chief Kaikioʻewa in the ‘O‘oma ahupuaʻa in Kona (the place where he first learned to be a king.)

Other early education the infant Prince received was at Kailua-Kona, from the Rev. Asa Thurston and Thomas Hopu, a native Hawaiian who had been educated on the continent and who came with the first missionaries to Hawaiʻi.  In Honolulu, the Prince was the pupil of Rev. Hiram Bingham.

The younger brother of Liholiho, he served as Hawai‘i’s King from 1825 to 1854 – the longest ruling monarch over the Hawaiian Kingdom.  Kauikeaouli was a pre-teen when he ascended to the throne; in the early years of his rule, he served under a regency with Kaʻahumanu, his father’s favorite queen, as joint ruler.

During the early- to mid-1800s timeframe, there were significant changes occurring that greatly affected the Hawaiian people:


There is scarcely in history, ancient or modem, any King to whom so many public reforms and benefits can be ascribed, as the achievements of his reign. Yet what King has had to contend with so many difficulties as King Kamehameha III? (The Polynesian, 1855)

“That the existence of the King, chiefs and the natives, can only be preserved by having a government efficient for the administration of enlightened justice, both to natives and the subjects of foreign powers residing in the islands, and that chiefly through missionary efforts the natives have made such progress in education and knowledge, as to justify the belief that by further training, they may be rendered capable of conducting efficiently the affairs of government; but that they are not at present so far advanced.”  (Kamehameha IV, In Obituary to the departed King)

In private life, Kamehameha III  was mild, kind, affable, generous and forgiving. He was never more happy than when free from the cares and trappings of state. He could enjoy himself sociably with his friends, who were much attached to him. (The Polynesian, 1855)

Having associated much, while a boy, with foreigners, he continued to the last to be fond of their company. Without his personal influence, the law to allow them to hold lands in fee simple could never have been enacted; neither could conflicting claims to land have been settled and registered by that most useful institution, the Board of Land Commissioners.  (The Polynesian, 1855)

It is hardly possible to conceive any King more generally beloved than was Kamehameha III; more universally obeyed, or more completely sovereign in the essential respect of independent sovereignty, that of governing his subjects free from any influence or control coming from beyond the limits of his own jurisdiction.  (The Polynesian, 1855)

Under his leadership, Hawaiʻi changed from an isolated island kingdom to a recognized member of the modem world. Many of the things he did as king still influence life in Hawaiʻi today.  (Kamehameha Schools Press)

The following are only some of the many accomplishments of Kamehameha III (Kauikeaouli:)

Happy Birthday and Cheers to Kauikeaouli, Kamehameha III.  I think I'll have a Guinness (or two) tonight in his honor.  (Happy St Patrick’s Day.)

The image shows Kamehameha III (Kauikeaouli.)   In addition, I have included other related images in a folder of like name in the Photos section on my Facebook and Google+ pages.