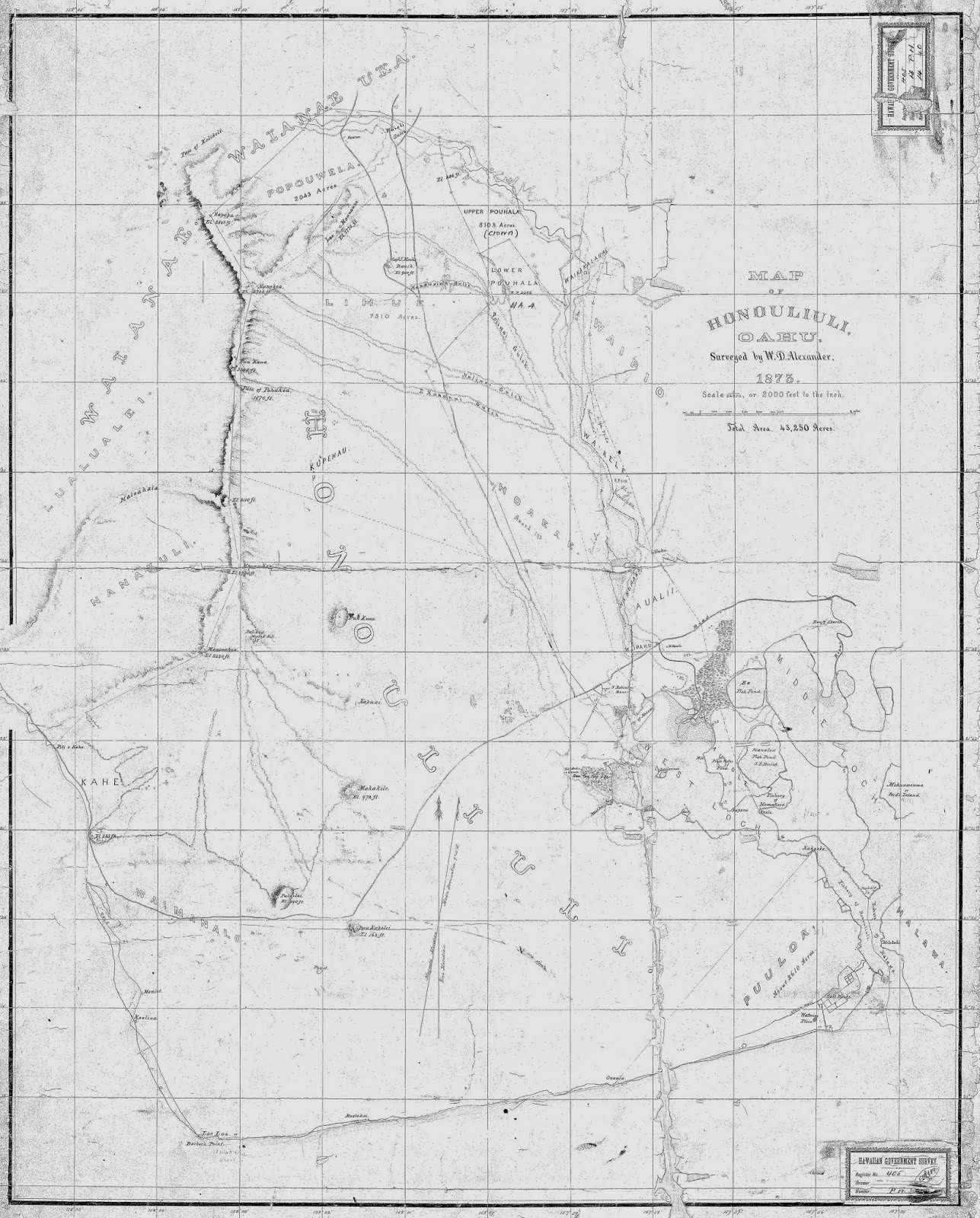 The island of Oʻahu is divided into 6 moku (districts), consisting of: ‘Ewa, Kona, Koʻolauloa, Koʻolaupoko, Waialua and Waiʻanae. These moku were further divided into 86 ahupua‘a (land divisions within a moku.)

‘Ewa was at one time the political center for O‘ahu chiefs. This was probably due to its abundant resources that supported the households of the chiefs, particularly the many fishponds around the lochs of Puʻuloa (“long hill,) better known today as Pearl Harbor. (Cultural Surveys)

Each had fisheries in the harbor, floodplains with irrigated kalo and fishponds, and interior (lower kula valley streams/gulches) and mountain forests.  One of these, Honouliuli, had a large coastal area, including what it is typically referred to as the “ʻEwa Plains.”  (Kirch)

Honouliuli includes lands extending from the mountains, to the watered plains where loʻi kalo (taro pond fields) and loko ia (fishponds) were developed, to the arid plains and rich fisheries on the ocean. Along the ocean-fronted coast of Honouliuli are noted places in lore and ancient life, such as Keahi, Kupaka, Keoneula (Oneula), Kualakai, Kalaeloa and Koʻolina.  (Maly)

Honouliuli (dark bay) includes a wide plain back of Puʻuloa (Pearl Harbor) and Keahi (a point west of Pearl Harbor) where the homeless, friendless ghosts were said to wander about. These were the ghosts of people who were not found by their family ʻaumakua or gods and taken home with them, or had not found the leaping places where they could leap into the nether world.  (Pukui)

In 1793, Captain George Vancouver described this area as desolate and barren:  “From the commencement of the high land to the westward of Opooroah (Puʻuloa – Pearl Harbor) was … one barren rocky waste, nearly destitute of verdure, cultivation or inhabitants, with little variation all to the west point of the island. …”

In 1839, Missionary EO Hall described the area between Pearl Harbor and Kalaeloa as follows: “Passing all the villages (after leaving the Pearl River) at one or two of which we stopped, we crossed the barren desolate plain”.  (Robicheaux)  In the 1880s, these lands were being turned over to cattle grazing and continued through the early-1900s.

It was also covered with kiawe trees; it was noted that the kiawe forests there and the Honouliuli region supplied much of the fuel for kitchen fires in Honolulu.

Reported in 1898, a few fishermen and some of their families built shanties by the shore where they lived, fished and traded their catch for taro at ‘Ewa.  Their drinking water was taken from nearby ponds, and it was so brackish that other people could not stand to drink it. (Cameron; Maly)

James Campbell, who arrived in Hawaiʻi in 1850, ended up in Lāhainā and started a sugar plantation there in 1860 (later known as Pioneer Mill.)  He also started to acquire lands in Oʻahu, Maui and the island of Hawaiʻi.

In 1876, he purchased approximately 15,000-acres at Kahuku on the northernmost tip of Oʻahu from HA Widemann and Julius L Richardson. In 1877, he acquired from John Coney 41,000-acres of ranch land at Honouliuli.

Many critics scoffed at the doubtful value of his Honouliuli purchase. But Campbell envisioned supplying the arid area with water and commissioned California well-driller James Ashley to drill a well on his Honouliuli Ranch.

In 1879, Ashley drilled Hawaiʻi’s first artesian well; James Campbell's vision had made it possible for Hawaiʻi's people to grow sugar cane on the dry lands of the ʻEwa Plain.

“At 240 feet the water commenced to overflow. The bore was continued to 273 feet, the flow increasing and coming to rise from one-half to two-thirds of an inch crown above the pipe, 7 inches in diameter.  This success was a happy surprise to the community. (There was) a sheet of pure water flowing like a dome of glass from all sides of the well casing, and continuing to flow night and day, without diminution.”  (Congressional Record, 1881)

What they discovered was vast reservoirs of artesian water; the groundwater here is composed of a freshwater lens that generally moves toward the ocean but is impeded by a wedge of caprock that overlies the volcanic rock near the coast.  (Nellist, Bauer)

When the first well came in at Honouliuli the Hawaiians named it "Waianiani" (crystal waters.)  (Nellist) The ʻEwa Plain has been irrigated with ground water since 1890. By 1930, Ewa Plantation had drilled 70 artesian wells to irrigate cane lands; more were drilled later.

It was some years after the first artesian wells were brought in before there was a general understanding of the formation of the coastal caprock and its vital importance in the creation and functioning of the artesian reservoirs.

Discovery of artesian water at Honouliuli was beyond question the most important single contribution to the development of Oʻahu and Honolulu as we know the island and city today.  (Nellist)  (The flow from the well continued for 60-years until it was sealed by the City and County of Honolulu in 1939.)

In 1889, Campbell leased about 40,000-acres of land for fifty years to BF Dillingham (of Oʻahu Railway and Land Co;) after several assignments and sub-leases, about 7,860-acres of Campbell land ended up with Ewa Planation.

By 1923, Ewa Plantation was the first sugar company in the world to raise ten tons of sugar per acre and, by 1933, the plantation produced over 61,000-tons of sugar a year.

Ewa Plantation was considered one of the most prosperous plantations in Hawaiʻi and in 1931 a new 50-year lease was executed, completing the agreement with Oʻahu Railway and Land Company and beginning an association with Campbell Estate.

By 1936, ʻEwa Plantation Company was the first plantation to have a fully mechanized harvesting operation and by 1946 tests were made to convert the hauling of cane from railroads to large trucks.

During WWII, Japanese Americans were put in internment camps in at least eight locations on Hawaiʻi; one of those sites was at Honouliuli Gulch.  The forced removal of these individuals began a nearly four-year odyssey to a series of camps in Hawaiʻi and on the continental United States.

They were put in these camps, not because they had been tried and found guilty of something, but because either they or their parents or ancestors were from Japan and, as such, they were deemed a "threat" to national security.

Campbell became known by the Hawaiians as “Kimo Ona-Milliona” (James the Millionaire).  Despite his success in sugar, his interests turned to other matters, primarily ranching and real estate.

The image shows an early (1873) map of Honouliuli (DAGS.)  In addition, I have included other related images in a folder of like name in the Photos section on my Facebook and Google+ pages.