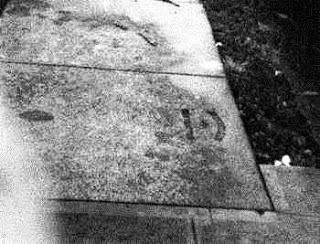 As early as 1838, sidewalks along Honolulu streets were constructed, usually of wood.  Paved streets were unknown until 1881; in that year, the first, Fort Street, was paved.

The first sidewalk made of brick was laid down in 1857 fronting a shop on Merchant Street; Hawaii’s first concrete sidewalk was poured in front of a store on Queen Street in 1886.

Here are a couple stories about some ‘historic’ curbs and sidewalks in Honolulu. (Remember, State law, §6E-2 says "Historic property" means any building, structure, object, district, area, or site, including heiau and underwater site, which is over fifty years old.)

As a UH graduate, I am very familiar with the area known as “the Quarry” on the UH campus.  We still go down to that area of the campus to watch UH athletics.

From 1889 to 1949, Mōʻiliʻili Quarry provided the stone that was used to build Honolulu’s streets, sidewalks and curbstones, as well as some of its prominent buildings.

Holes were cut into the rock wall, using pneumatic drills. Dynamite was fitted into the holes, and its detonation would bring the entire face of the wall down, then they took the rock to the crushing plant within the Quarry site.

The first major and permanent construction of facilities in the Quarry began in 1956; and in 1957 Klum Gym, Team Lockers-Varsity Building, Locker Building, classrooms and an indoor enclosed boxing room were completed.

As you walk along Honolulu streets, look at the old lava rock curbs; it’s very likely these came from the Mōʻiliʻili Quarry.  These curbs are historic and serve as examples of the distinctive method of street construction in Honolulu during the late-1800s and the early-1900s.

These curb stones are rough-hewn below grade, but squared at their exposed surfaces. The width and height of the exposed surfaces are typically about 6 inches, but the buried depth is several feet. They are of varying lengths, from 2' to over 5'. Some curbs at intersections exhibit a slight curvature to follow the contour of the street corner.

In the mid- to late-19th century, sailing vessels from China or the continent bound for Honolulu to pick up sandalwood or sugar cane would fill their holds with granite as ballast (it added stability to the sailing vessels and weren't needed when loaded with heavy cargo.)

As more and more ships dumped their granite ballast on the docks, someone came up with the idea to use them for sidewalks.  These blocks are scattered throughout Chinatown, and many were used in the construction of a few buildings.

The original stones were several inches thick and were placed side by side with no gap between them - many of these are still around.  However, today, there are reproductions of these sidewalks on Maunakea Street

In the early 1900s, the city of Honolulu was engaged in modernizing its streets and replacing dusty footpaths with broad sidewalks.  The following appeared in the Hawaiian Annual of 1900:
"Official notice had been published requiring property owners to construct concrete sidewalks throughout the city, as far out as Thomas Square, according to specifications.  This public improvement is in progress, to be followed by the re-macadamizing (paving) of many streets."

John Walker (later, the firm Walker-Moody) pursued this business and soon his sidewalks proliferated throughout the city.  Unlike modern sidewalks, his were a very dark gray due to the addition of charcoal, and were given a smooth, almost polished finish, many of them labeled with the name John Walker etched in the curbstones (few remain.)

Back then, the name John Walker was virtually synonymous with sidewalks.  So well known was the name the unemployed men, when asked, "Who are you working for”, often answered, "John Walker”.  In other words, they were pounding the sidewalks looking for work.

Again, historic property is generally defined as something that is over 50-years old.  In addition to criminal penalties, State law may impose Civil Penalties on any person who violates the law with fines up to $10,000 for each separate violation (each day of each violation constitutes a separate violation.)

When I was at DLNR, we were involved with a case where historic curb stones were being used as part of a decorative walkway in a private garden.  (They were ultimately returned.)

The image shows a John Walker sidewalk paving block (Walker-Moody, taken in 1971.)  In addition, I have added other images related to historic curbs and sidewalks in a folder of like name in the photos section on my Facebook and Google+ pages.