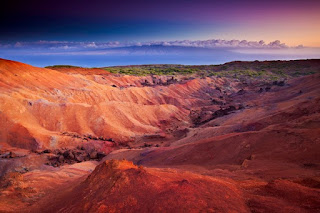 Ka‘ā (literally translated means, "the rocky area") is the largest ahupuaʻa on Lānaʻi, and covers almost 19,500-acres of land, the entire north end of the island.

At one time Ka‘ā supported many near-shore settlements, upland agricultural fields, resource collection/workshop areas and ceremonial sites. The residents of Ka‘ā regularly traveled between the coast and uplands, and several named localities in both climatic regions are found in native traditions and historical literature.

Native Hawaiian chants and traditions passed down over time speak loudly of the cultural and historical significance of this area.

The honu (turtle) population at Polihua is integral to the account of Pele's migration to Hawaiʻi, and in the time when ancient Hawaiians lived at Ka‘ā the honu provided important resources for traditional subsistence.

The tradition of the Lānaʻi priest, Kawelo, and a priest of Moloka‘i identified in various accounts as either Lani-kāula or Waha - is of regional importance to the people of Lānaʻi and Moloka‘i.

Kawelo was a famous priest of Lānaʻi, who is remembered in several written accounts, dating back to at least 1868. Information collected by Kenneth Emory from Lānaʻi in 1921-1922, and accounts by other native residents, place prominent sites associated with this legend in the ahupua‘a of Ka‘ā.

In the latter tradition, we see that at Ka‘ā, Lānaʻi, Kawelo kept an altar on which a fire was burned to protect the well-being of the people of his island.

There are several narratives, with varying circumstances and different characters, but each focusses on the central theme of the priest Kawelo burning a fire on an altar in order to protect the well-being of the residents of Lānaʻi.

Kewalo on Lānaʻi and Waha on Molokaʻi challenged each other to keep a fire burning on their respective island longer than the other, and the winner's island would be rewarded with great abundance.

The Lānaʻi kahuna, Kawelo, used every piece of vegetation in Keahiakawelo to keep his fire burning, which is why this area is so barren today.

In 1873, Walter Murray Gibson published “A Legend of Lanai” in the newspaper “Nu Hou.” Titled “Keahiakawelo” (The fire of Kawelo), in the account there are details on events of the legend and reference to the upland region of Ka‘ā:

“In the district of Kaa, on the western side of Lanai, there are several tumuli of large stones, and some rude contrivance of sacrificial altar, surrounded by a low round enclosure. Here three generations anterior to the reign of Kahekili, who was King of Maui and Lanai, lived the prophet Kawelo, who kept up a constant fire burning day and night upon this altar; and a similar fire responsive to it, was maintained by another prophet Waha, on the opposite side of Molokai.”

“Now Kawelo had a daughter to assist in keeping watch and to feed the sacred fire, and Waha had a son; and it was declared to the people by these prophets, that so long as the fire burned, hogs and dogs would never cease from the land; but should it become extinguished these animals would pass away, and the kanakas would only have fish and sea-weed to eat with their poi. . . “

Gibson described how the boy Nui, of Moloka‘i, and the girl Pepe, of Lānaʻi, came to fall in love, and how on one fateful night, they failed to keep the fires on their respective islands lit - the fire on the “altar of Keahiakawelo” had died. Upon discovering their error, Nui and Pepe fled to Maui, and Kawelo:

“... threw himself headlong from a precipice of the barranca [bluff] of Maunalei. And many natives of Lanai believe to this day, that their native hogs and dogs have passed away, in consequence of the prophecy of Kawelo.”

Keahiakawelo is an otherworldly rock garden at the end of rocky Polihua Road. Located roughly 45-minutes from Lānaʻi City on the northwest side of the island, its landscape is populated with boulders and rock towers.

The region around Keahiakawelo is one of the most significant storied landscapes on Lānaʻi; there are numerous traditions describing how native Hawaiians were able to survive on Lānaʻi, and why, at one time, Lānaʻi was noted for purple colored lehua blossoms.

As the tradition of the area known as Keahiakawelo reveals, the Ka‘ā region of Lānaʻi, with the view plain to the eastern end of Moloka'i and the famed kukui tree grove of Lanikāula and Mokuhoʻoniki, is one of great significance to the history of Lānaʻi and connected by history to the larger Maui group of islands.

The rock towers, spires and formations formed by centuries of erosion are at their most enchanting at dusk. The setting sun casts a warm orange glow on the rocks illuminating them in brilliant reds and purples.

One Island legend says that the rocks and boulders were dropped from the sky by the gods tending their gardens. Another ancient tale explains that the rocks house the spirits of ancient Hawaiian warriors.

And still another legend says that the gods enjoyed creating art, and this spot on the island is where they made their favorite sculptures. They created powerful winds to literally sculpt each rock formation (perhaps explaining why there is no vegetation.)

Science suggests that these formations are the result of thousands of years of erosion that created pinnacles and buttes in one remote canyon area. Just one look, however, and you’ll wonder whether each rock has been placed for some divine purpose.

Today, many refer to this area as “Garden of the Gods.”

The image shows Ke-ahi-a-Kawelo (“the-fire-of-Kawelo” - Garden of the Gods, Lānaʻi - (NationalGeographic.)) Much of the information here came from writings by Kepā Maly, Kumu Pono Associates.  In addition, I have included a few other images in a folder of like kind in the Photos section on my Facebook and Google+ pages.