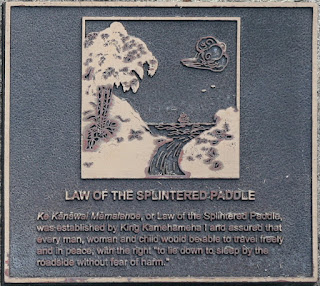 In old Hawai‘i, people knew their place in life; some were born to be ali‘i (chiefs,) others were maka‘āinana (commoners.)

Each followed protocols, traditions and kapu.

The Ali‘i were descended from the gods and had strong mana (spiritual power.)

Even though kapu and traditions guided people on how to behave, sometimes innocent people got caught in the middle of feuding chiefs.

A story suggests that on one occasion, Kamehameha I was fighting in Puna.

While chasing two fishermen (presumably with the intention to kill them), his leg was caught in the reef and, in defense, one of the fisherman hit him on the head with a paddle, which broke into pieces.

Kamehameha was able to escape (because the fisherman fled, rather than finishing him off.)

The story continues that Kamehameha learned from this experience and saw that it was wrong to misuse power by attacking innocent people.

Years later, Kamehameha summoned the two fishermen.  When they came, he pardoned them and admitted his mistake by proclaiming a new law, Kānāwai Māmalahoe - Law of the Splintered Paddle.

Oh people,
Honor thy gods;
Respect alike [the rights of]
People both great and humble;
See to it that our aged,
Our women and our children
Lie down to sleep by the roadside
Without fear of harm.
Disobey, and die.

Kamehameha’s Law of the Splintered Paddle of 1797 is enshrined in the State constitution, Article 9, Section 10:

“Let every elderly person, woman and child lie by the roadside in safety”.

It has become a model for modern human rights law regarding the treatment of civilians and other non-combatants.

Kānāwai Māmalahoe appears as a symbol of crossed paddles in the center of the badge of the Honolulu Police Department.

A plaque, facing mauka on the Kamehameha Statue outside Ali‘iōlani Hale in Honolulu, notes the Law of the Splintered Paddle (it is the image noted here.)