Waikīkī – Before the Ala Wai 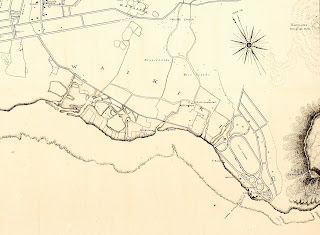 Waikīkī was once a vast marshland whose boundaries encompassed more than 2,000-acres (as compared to its present 500-acres we call Waikīkī, today).

The name Waikīkī, which means “water spurting from many sources,” was well adapted to the character of the swampy land of ancient Waikīkī, where water from the upland valleys would gush forth from underground.

Three main valleys Makiki, Mānoa, and Pālolo are mauka of Waikīkī and through them their respective streams (and springs in Mānoa (Punahou and Kānewai)) watered the marshland below.

As they entered the flat Waikīkī Plain, the names of the streams changed; the Mānoa became the Kālia and the Pālolo became the Pāhoa (they joined near Hamohamo (now an area mauka of the Kapahulu Library.))

While at the upper elevations, the streams have the ahupuaʻa names, at lower elevations, after merging/dividing, they have different names, as they enter the ocean, Pi‘inaio, ‘Āpuakēhau and Kuekaunahi.

The Pi‘inaio (Makiki) entered the sea at Kālia (near what is now Fort DeRussy as a wide delta (kahawai,) the ‘Āpuakēhau (Mānoa and Kālia,) also called the Muliwai o Kawehewehe (“the stream that opens the way” on some maps,) emptied in the ocean at Helumoa (between the Royal Hawaiian and Moana Hotels) and the Kuekaunahi (Pālolo) once emptied into the sea at Hamohamo (near the intersection of ‘Ōhua and Kalākaua Avenues.)  The land between these three streams was called Waikolu, meaning “three waters.”

The early Hawaiian settlers, who arrived around 600 AD, gradually transformed the marsh into hundreds of taro fields, fish ponds and gardens.  Waikiki was once one of the most productive agricultural areas in old Hawai‘i.

Beginning in the 1400s, a vast system of irrigated taro fields and fish ponds were constructed.  This field system took advantage of streams descending from Makiki, Mānoa and Pālolo valleys which also provided ample fresh water for the Hawaiians living in the ahupua‘a.

From ancient times, Waikīkī has been a popular surfing spot. Indeed, this is one of the reasons why the chiefs of old make their homes and headquarters in Waikīkī for hundreds of years.

Waikīkī, by the time of the arrival of Europeans in the Hawaiian Islands during the late eighteenth century, had long been a center of population and political power on O‘ahu.

The preeminence of Waikīkī continued into the eighteenth century and is illustrated by Kamehameha’s decision to reside there after taking control of O‘ahu by defeating the island’s chief, Kalanikūpule.

Following the Great Mahele in 1848, many of the fishponds and irrigated and dry-land agricultural plots were continued to be farmed, however at a greatly reduced scale (due to manpower limitations.)

In the 1860s and 1870s, former Asian sugar plantation workers (Japanese and Chinese) replaced the taro and farmed more than 500-acres of wetlands in rice fields, also raising fish and ducks in the ponds.

However, drainage problems started to develop in Waikīkī from the late nineteenth century because of urbanization, when roads were built and expanded in the area (thereby blocking runoff) and when a drainage system for land from Punchbowl to Makiki diverted surface water to Waikīkī.

Nearly 85% of present Waikīkī (most of the land west of the present Lewers Street or mauka of Kalākaua) were in wetland agriculture or aquaculture.

During the first decade of the 20th century, the US War Department acquired more than 70-acres in the Kālia portion of Waikīkī for the establishment of a military reservation called Fort DeRussy.

The Army started filling in the fishponds which covered most of the Fort - pumping fill from the ocean continuously for nearly a year in order to build up an area on which permanent structures could be built. Thus the Army began the transformation of Waikīkī from wetlands to solid ground.

In accordance with the law, a reclamation project was proposed and conducted under the pretext of doing sanitation. This project aimed to dig a canal (Ala Wai Canal of today) in the center of Waikiki and reclaim all these swamps by earth and sand dug out from the construction of the canal.

Soon after, in 1928, the construction of the Royal Hawaiian Hotel was completed (joining the Moana Hotel (1901,) marking the beginning of Waikīkī as a world-class tourist attraction.

The image is a portion of an 1877 map of the  Waikīkī area (UH-Hamilton Library.)  In addition, I have posted other pre-Ala Wai Canal photos/maps in a folder of like name in the Photos section.

I have a lot more stories, images and maps of old Waikīkī; this is setting the foundation for those future stories.