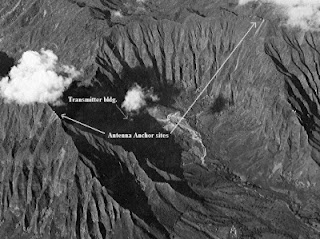 With World War II underway, the Navy recognized the need to be able to communicate across the Pacific.

A plan was proposed in the early spring of 1942; a group of radio experts determined a superpower radio station with pan-Pacific range might be built provided that the antenna could be raised high enough above the ground.

The greater the power to be radiated, the higher and larger must be the antenna system and the network of ground wires under it.

An Alexanderson Alternator was the sending source; it is a rotating machine invented in 1904 for use as a radio transmitter (as a technology, it was later replaced by vacuum tube transmitters.)

The Navy discovered that, rather than the conventional steel radio tower, the best way to accomplish that was by stringing copper cable between the peaks of two mountains with vertical drops.

The solution was to find a topographic feature that would act like the "unbuildable" tall tower.  Using technology developed pre-World War I, they strategically positioned four Alexanderson Alternators; one was located in Haiku Valley.

Haiku Valley with its horseshoe shape and sheer side-walls filled the prescription perfectly, except for the logistical nightmare of constructing in an all but inaccessible area.

Then stepped forward (and up) two pioneers, Bill Adams and Louis Otto, who in 21-days, climbed the vertical cliffs in Haiku Valley, pounding in iron spikes into the face of the cliff (to be used as supports for a ladder and wooden staircase up the mountain.)

The Navy then installed a lift to haul up materials and strung cables across the valley.  The Alexanderson Alternator radio system, transmitting Morse code across the Pacific, was operational in 3-months.

The equipment at Haiku provided reliable transoceanic radiotelegraph communication and was able to send signals to submarines during World War 2 - while they remained underwater - as far away as Tokyo Bay.

The Navy maintained the Haiku system from 1943 to 1970, when they reconfigured the facility as an OMEGA radio navigation system: it then became part of a network of worldwide OMEGA stations (two US stations (Haiku and North Dakota,) joined by Argentina, Norway, Liberia, France, Japan and Australia.)

When the eight station chain became operational, day to day operations at Haiku were managed by the United States Coast Guard and was used by several airlines flying long range routes over water, as well as by military forces.  The new station could radiate transmissions at a power of 10,000-watts and over an 8,000-mile radius.

The OMEGA antenna system reaches 7,200-feet across Haiku Valley and is 1,250-feet above the ground. The anchors weigh over 180,000-pounds. Unlike the original construction for the Alexanderson Alternator (climbing the cliff,) a helicopter, helium balloons and hot air balloons were used in erecting the anchors and placing the wires.

OMEGA was the first truly-global radio navigation system and had the ability to achieve a four-mile accuracy when fixing a position for aircraft.

Using receiver units, it enabled ships and aircraft to determine their position by receiving very low frequency radio signals transmitted by a network of fixed terrestrial radio beacons. The Haiku OMEGA facility became operational around 1971 and was shut down in 1997.

Initially, the system was to be used for navigating nuclear bombers across the North Pole to Russia.  Later, it was found useful for submarines and aircraft.

With the Global Positioning System (GPS) being declared fully operational, the use of OMEGA had dwindled to a point where continued operation was not economically justified; it ended on September 30, 1997.

Obviously, all of this ultimately leads us to a discussion on the Haiku Ladder, Haiku Stairs – the Stairway to Heaven.

The Stairway is a 3,922-step ladder/stairway ascending the summit of the Koʻolau mountain range.   First built by the Navy in 1942 to access transmission facilities at the top of the ridge, the wooden stairs were replaced in 1955 with ones built of galvanized metal.

In 1997, after the OMEGA facility was abandoned and plans were underway to remove the Stairs, Mayor Harris requested that the Coast Guard transfer the Stairs to the City.  The City then spent $875,000 to repair the Haiku Stairs.

The City had planned to reopen the Haiku Stairs in October 2002. But from 2002 to 2003, the popular hiking attraction became a point of contention with area residents.

They complained that as many as 200-hikers a day were trespassing through their property, parking on their streets, blocking mail delivery and trash pickup and arriving early in the morning, causing dogs to bark and waking residents.

Then, in 2005, Mayor Hannemann tried to transfer the Stairs to DLNR.  I was DLNR Director then.  While I believe the stairs are an excellent climbing (and vertigo) experience, I do not believe its ownership and operation is a state concern.  (It is certainly not a natural trail, that’s the kind of stuff DLNR deals with.)

We recommended that a private entity step forward and manage the stairs – for the City or lease it from them.  We believed that an operator could charge a fee for hikers to climb the stairs and use the revenue for operations and insurance.

The image shows the initial (1943) antenna anchor sites where then spanned across Haiku Valley.  (Thanks to David Jessup for images and information on this.)  In addition, I have posted lots of other WWII, OMEGA and Stairway images in a folder of like name in the Photos section on my Facebook page.