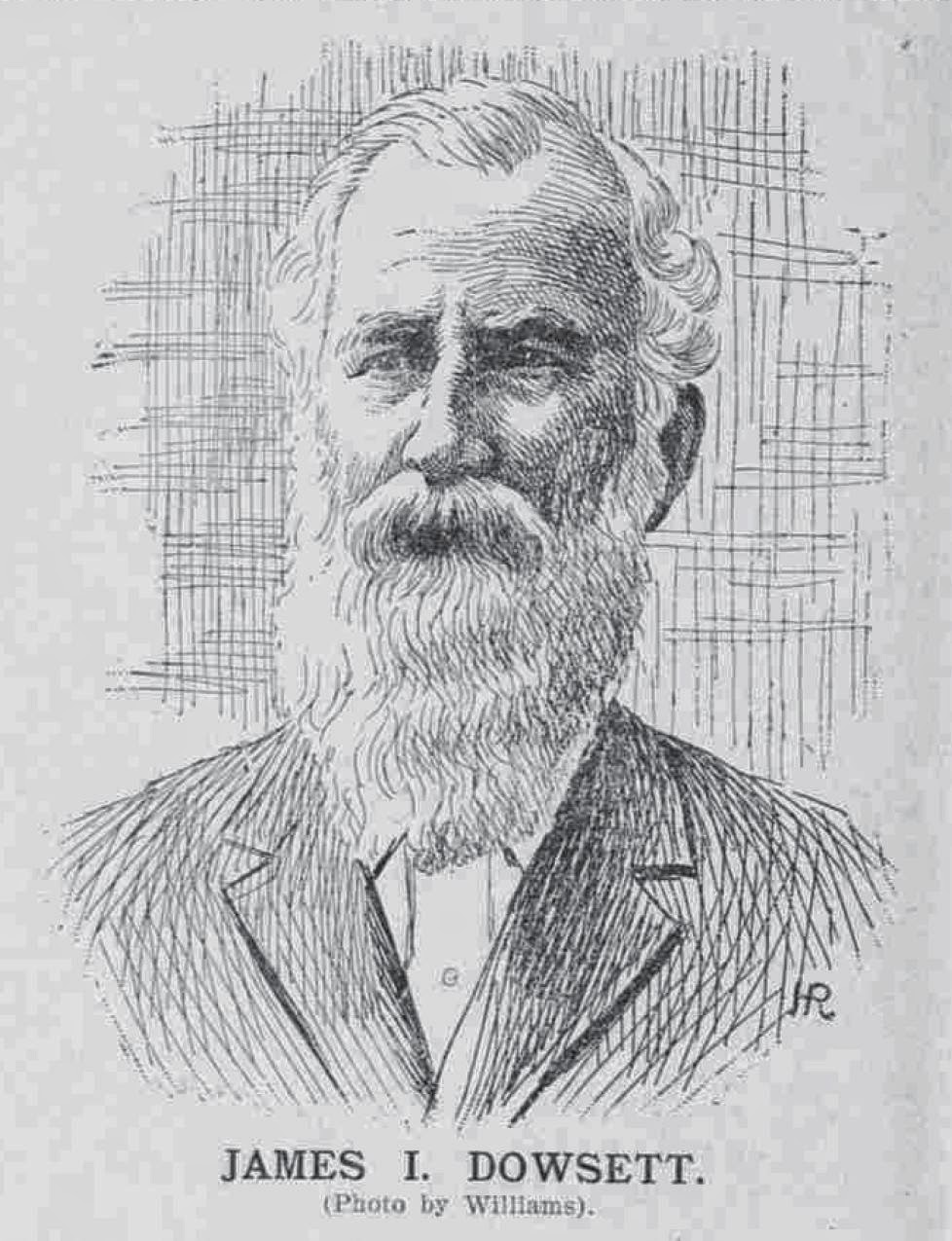 Samuel and Mary married in Australia. A ship captain, Samuel did shipping business in Australia and was into whaling. Samuel first arrived in Hawaiʻi in 1822 when he was first officer of the “Mermaid,” accompanying the “Prince Regent,” a gift-ship from King George IV of England to King Kamehameha I, promised to the King by George Vancouver.

Samuel returned with his wife on July 17, 1828, arriving on the brig Wellington; they set up their home in Hawaiʻi at that time.  Samuel and Mary had 4 children, James, Samuel Henry, Elizabeth Jane and Deborah Melville.

“The house in which (James) first saw the light of day and which was built by his father, still stands and is occupied. It is the 2-story building in Union street, next to the old bell tower fire station.”  (Hawaiian Gazette, June 17, 1898; the house is now gone)

During his youth, Dowsett was a playmate of Kamehameha IV, Kamehameha V and future King Lunalilo.  James was less than five years old when in 1834 his father sailed away on a pearl fishing expedition and was lost at sea.

In his school days Dowsett was associated with Romualdo Pacheco (who later became Governor California; Pacheco was sent to Hawaiʻi from California to be educated in the islands, a custom followed extensively in early days by parents who sought the best schools for their children.)

Dowsett was hardly more than twelve when he was hired by the Hudson's Bay Co, but continued his schooling on the side. (His mother refused offers of remarriage and remained a widow until her death.)  In the early-1860s he entered the whaling business, owning a fleet of whaling ships.

“He did not care for public office. Had he yearned for political preferment, any office was at his disposal for many years. He was appointed a Noble of the Kingdom by Kamehameha III and was friend and confident of Kamehameha IV and V.”

“His advice was often sought by the monarchs and was given as one entirely disinterested and be held the trust of those in the highest positions as well as the implicit confidence of the common people. He was a great favorite with the native Hawaiians and spoke their language beautifully.”  (Hawaiian Gazette, June 17, 1898)  The Hawaiians called him "Kimo Pelekane" (Jim the Englishman.)

Besides his whaling activities, Mr. Dowsett engaged in the lumber business and owned a fleet of schooners and small steamers operating between the islands.

He was engaged in ranching as early as 1850, and a medal was awarded him at the Agricultural Fair at the time for the best pair of “working oxen.” Dowsett was the first rancher to import Aberdeen Angus stock to Hawaiʻi.

Puʻuloa Salt Works (property of Dowsett) “are at the west side of the entrance to Pearl River, and the windmill is a prominent object in the landscape as we enter. It is also one of the guides in steeling vessels inward.  On the eastern side and opposite to the Puʻuloa buildings, is the fishery, where are a number of buildings inhabited by Chinamen.”  (Daily Bulletin, January 6, 1889)

“Mr. Dowsett was a man of kindly, genial disposition. It was a habit of his for a number of years to make a trip to Waikiki each evening in a street car. It was genuine treat to be a passenger with him.”

“It was a study for one not acquainted with him to watch him in the car and to see all the natives and even the Chinese pay their respects to him on entering the car. Everybody knew who he was and strangers liked him in advance, while those who came to speaking terms with him valued the privilege.”

“He was a quick thinker and an excellent reasoner and while not a talkative man was always willing to supply any information from his great storehouse that might be useful to another or that might interest an inquirer.”

“He knew the town, the people and the country. He never left the Islands but once in his whole life and then four days in San Francisco was enough of life in foreign parts. He was a perfect encyclopedia of history and biography not only of Honolulu and Oahu, but of the entire group.”

“The common suggestion to one in search of obscure historical data was to go to Mr. Dowsett and he never failed. He could always supply day and date and all required details.”   (Hawaiian Gazette, June 17, 1898)

Dowsett was one of the founders of the British Club, now the Pacific Club of Honolulu, and was a trustee of The Queen’s Hospital from its establishment.

Dowsett took on Chung Kun Ai as his protégé, allowing Ai to use a portion of his warehouse, and Ai started importing cigars, tea, peanut oil, shoe nails and other items. Ai and others later started City Mill, a rice milling and lumber importing business in Chinatown, Honolulu.  The City Mill building on Nimitz was dedicated to Dowsett.

“Dowsett saw the grass hut replaced by the stone business block and the taro patch filled up for mansion site. He saw the little paths become fine streets and the broad and barren plains thickly populated districts. He saw the life of a nation change. ... Through all this he was a close observer and always on the side of what was right and just.”   (Hawaiian Gazette, June 17, 1898)

Dowsett died on June 14, 1898; “news of the death of Mr. Dowsett had been sent all over the Island and the Hawaiians in large numbers joined the throng of haoles calling to pay respects and offer consolation.”

“The older Hawaiians could not restrain themselves at all and gave vent to floods of tears and to strange wailings. They were overpowered and overcome by the thought that no more would they have the friendly greeting, the certain and reliable advice or the material assistance of the one who had been their reliance at all times and upon all occasions for so many years.”     (Hawaiian Gazette, June 17, 1898)

Subsequent Dowsett generations were also generous; in 1930, Herbert M. Dowsett, Llewellyn F Dowsett and Aileen Dowsett White donated 7-acres and their family estate on Punahou Street to the Shriners Hospital.  Dowsett Avenue and Ragsdale Place in Dowsett Tract and Highlands in Nuʻuanu are named after James and Annie.

The image shows James Isaac Dowsett (Hawaiian Gazette.) In addition, I have added other images in a folder of like name in the Photos section on my Facebook and Google+ pages.