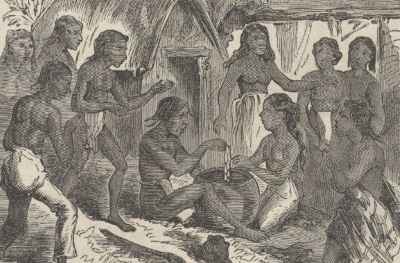 Aikapu Pā‘ao is reported to have introduced (or, at least expanded upon) a religious and political code in old Hawai`i, collectively called the kapu system. This forbid many things and demanded many more, with many infractions being punishable by death. One of the most fundamental of this type of prohibition forbade men and women from eating together and also prohibited women from eating certain foods - ʻaikapu (to eat according to the restrictions of the kapu.) The ʻaikapu is a belief in which males and females are separated in the act of eating; males being laʻa or ‘sacred,’ and females haumia or ‘defiling’ (by virtue of menstruation.) The ʻainoa following Kamehameha’s death continued and the ʻaikapu was not put into place – effectively ending the centuries-old kapu system. Some have suggested it was the missionaries that ended the kapu that disrupted the social/political system in the Islands; that is not true. The Hawaiians ended their centuries’ long social/political system.

Click link below for more images and information:
http://imagesofoldhawaii.com/aikapu/
Posted by Peter T Young at 2:00 AM