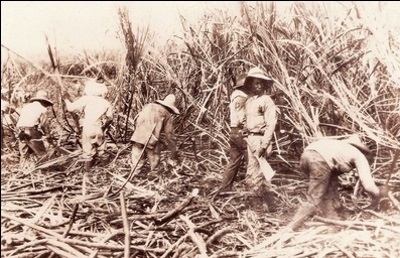 Tydings-McDuffie After its defeat in the Spanish-American War of 1898, Spain ceded the Philippines to the US in the Treaty of Paris. On February 4, 1899, just two days before the US Senate ratified the treaty, fighting broke out between American forces and Filipino nationalists – the ensuing Philippine-American War lasted three years. In 1907, the Philippines convened its first elected assembly, and in 1916, the Jones Act promised the nation eventual independence. Between 1906 and 1930, approximately 120,000-Filipinos came to Hawaiʻi to work on the sugar plantations, dramatically altering the territory's ethnic demographics. On March 24, 1934, President Roosevelt signed the Tydings-McDuffie Act, which provided for an autonomous Philippines Commonwealth government; the US granted independence in 1946.

Click link below for more images and information:
http://imagesofoldhawaii.com/tydings-mcduffie/
Posted by Peter T Young at 2:00 AM